Developer Celebrates How 'Green' Is Its Building

Two Thousand Tower Oaks Boulevard off Interstate 270 in Rockville looks like most modern suburban office complexes. It's a sleek and shiny metal and glass structure that seems to have plopped down like an alien spacecraft on a freshly mowed plot.

What's special about this building, its developers say, is the technology inside, which earned it the superlative from the state government of being the "greenest" office building in Maryland. 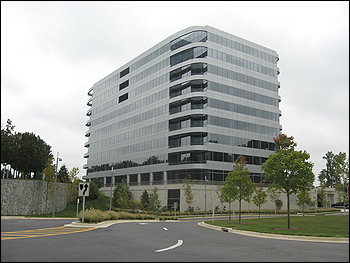 Walking into the building, made of an assortment of recycled items including old bluejeans and wheat products, visitors might think they are entering an office with dirt floors, joked Marnie Abramson of the building's developer, Tower Companies, which is based there.

The building's insulation is made of recycled denim. A composite of wheat products makes up the doors. The floor is old carpet that has been shaved down.

But, Abramson said, the structure has the amenities of the average office building and then some.

The building has a fitness center, a three-level underground parking garage and flat-screen televisions embedded in its elevator walls. Every work space has an outside view. The air-conditioning system circulates fresh, filtered air in the building every 51 minutes.

Abramson said the building challenges preconceived notions about environmentally friendly structures, such as that having a green building involves sacrificing certain conveniences or that environmental friendliness is counterintuitive to business success.

Tower Companies received $1.6 million in a state tax credit for the building, Abramson said, and dangling carrots like that in front of the business community is a simple and effective way to encourage them to take part.

Because of the tax credit, the idea of green practices as the norm "permeates into the marketplace," she said. "In the long term, we can build our way into a sustainable future."

The tax credit, which was created in 2001, allows developers to recoup 6 to 8 percent of construction costs if a building qualifies for platinum status in the Leadership in Energy and Environmental Design, or LEED, rating system.

Joe Shapiro, a spokesman for the comptroller, said the building is a "shining example for the rest of the state . . . because it has an economic value and an environmental value."

Abramson said prospective tenants have told her, " 'I don't know if I can afford the premium for a green building.' " Her response: "I don't think you can afford not to." Constructing something like Tower Oaks isn't just environmental citizenship; it's smart business, she said.

Going green increased overall construction costs by slightly more than 1 percent, she said. But employee productivity has increased, and fewer employees called in sick this past winter than in any other year, Abramson said, crediting the fresh air and natural light.

"You start off in the basement or in some place where no one wants to rent," she said of the standard property management work area. And, she said, with the lights flipped off and the midday sun flowing in, "it's just such a healthy environment."

Abramson said the company is looking toward the next step: finding a way to generate its electricity on site.

"We're superheroes," she said. "It's our job to save the planet through real estate."