Early in the spring when wild fires began to over run the state of Texas, a forest fire was  moving toward the residential buildings owned by the TM organization in the small town of Navasota. 80 miles NW of Houston.

As you can see from this photo before the fires began, this is a heavily wooded area.

Fire fighters were very concerned as the fire moved quickly in this direction.  They were most concerned for the  two new buildings due to their exterior wall surface as they  were only partially completed.  They rapidly built a berm(earth wall) around both these buildings. As you can see from their orientation, these are both built according to the principles of  Maharishi Vastu.

Because there was time, the fire fighters also put a berm around the older building with the southwest orientation, although they felt it would be relatively safe.

The fires arrived and went up to the berms surrounding the two new, Vastu buildings but did not cross over on any side.  The third building was a different story.  The fire went all the way around the berm then lept over the berm and destroyed the entire building. What remained was a  pile of  smoldering debris  of what had been a  two story building. 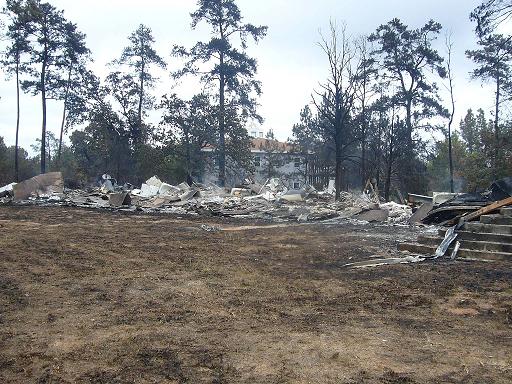 Even a partially completed Maharishi Vastu building is protected from negative influences that threaten to do  harm. 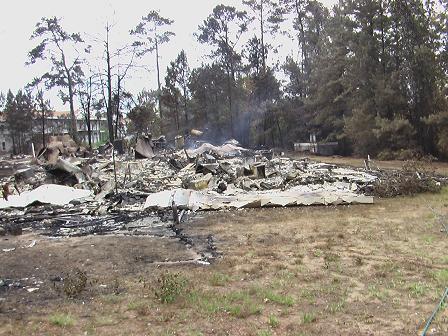 there have been numerous examples of Maharishi Vastu homes remaining safe from the destruction of fire. You can read about these experiences on our website at: http://www.maharishivastu.org/testimonials  and clicking on "Protection against Fires and Hurricanes". 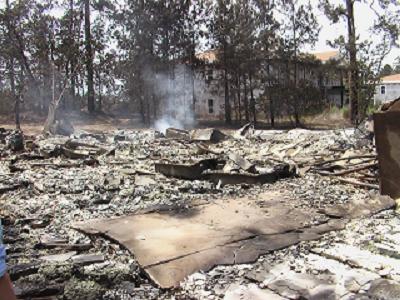